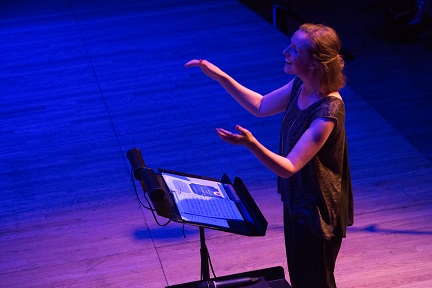 Elizabeth Woodhouse is the Founder and Artistic Director of the Choral Collective of Newport County (RI), which includes the Newport County Youth Chorus and the Aquidneck Singers (teen and adult treble chorus). She has worked with community choirs for more than 15 years in Denver, CO, Columbus, OH, New Haven, CT and most recently in Brooklyn, NY with the Brooklyn Youth Chorus. During her career she has conducted ensembles of varying ages and abilities. Elizabeth has prepared ensembles for performances at Carnegie Hall and Brooklyn Academy of Music (BAM) as well as for a national PBS Kids Commercial.

A leader in the children's choir community, Elizabeth has been a guest lecturer at Salve Regina University, the University of Colorado - Boulder, The Ohio State University, and Western Connecticut State University. Elizabeth is a frequent adjudicator at choral festivals including WorldStrides, Fantastic Festivals and Music in the Parks as well as the Rhode Island Junior High Choir Festival and the New Hampshire Music Educators Association Large Group Festival. In March 2019 she was the Guest Conductor for the RI All-State Elementary Chorus. This year Elizabeth will serve as the Guest Conductor of the Westchester All-County (NY) Intermediate Honor Choir and the NH and NY/ACDA Elementary Honor Choirs.

Elizabeth received a Bachelor of Music Education from the University of Colorado at Boulder and a Master of Music in Choral Conducting at The Ohio State University.

Elizabeth is the President of the Arts and Cultural Alliance of Newport County and the President-Elect of the RI chapter of the American Choral Directors Association (ACDA).
See Elizabeth's full resume below.